SecureLayer7 performs known vulnerabilities test cases on target hosts, unlike traditional checklist execution. The video PoC is prepared to demonstrate a flaw in the network and understand its vulnerability.

First, perform the enumeration of a host IP address and identify different services on the host.

Second, based on the attack surface found, we discover vulnerabilities in a host and exploit them further. The methodology includes first-host footprinting, live host detection, service enumeration, and operating system details. The exploitation process is an actual simulation, like cybercriminal exploitation, and using this method identifies multiple vulnerabilities.

Using the identified vulnerability, exploit scripts will be prepared for exploitation along with video PoC, which demonstrates steps that re-create vulnerabilities.

Last, understand the risk of vulnerability and priority flaws according to the risk-rating matrix, and prepare a final report.

At SecureLayer7, we follow the following engagement workflow for working with the clients.

Cybercriminals are continuingly looking for vulnerable servers or network devices on the internet. If the internet-facing asset is vulnerable for publicly available vulnerability, the attacker can gain access to the servers or network devices or system. SecureLayer7's external penetration is a simulation of an external attacker, and if network asset is vulnerable, pen testers compromise it.

Internal assets are most likely vulnerable to critical vulnerabilities. SecureLayer7 perform the pen test to identify such vulnerabilities and prepare to exploit for the found flaw and provide actionable mitigation.

Security configuration audit makes your organization compliant with regulation such as SOC3, HIPAA, PCi-DSS, and others. SecureLayer7 helps you to fix security misconfigurations and identify non-compliant configurations to turn it into submissive.

SecureLayer7 perform in-depth enumeration on the targeted system to identify vulnerabilities and exploit them. After successful exploitation, detailed video proof of concept provided. To gain maximum understanding of the network following the methodology used to perform network security assessment. 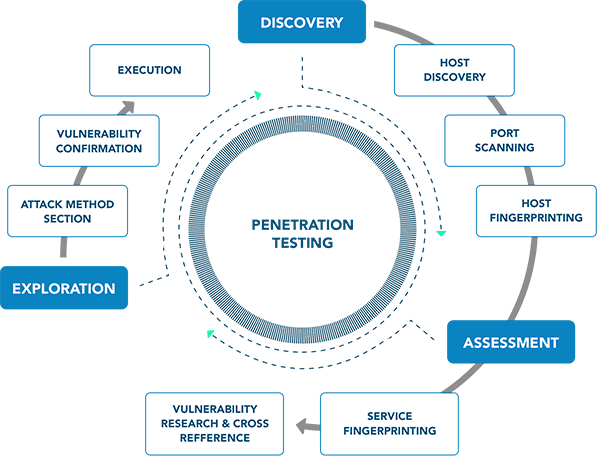 Wireless devices mostly use WPA2, WEP, and EAP authentication to the network. Recently, WPA2 was found vulnerable to KRACK (Key Reinstallation Attack); the WEP password can be easily guessed with network tools. SecureLayer7 looks for the potential vulnerabilities in the wireless network starting from the wireless LAN controller to the wireless devices.

Network Architecture Security Review. The objective of the network architecture security review is to identify weaknesses and gaps of existing security controls and to compare their alignment with the organization’s security objectives.

OUR SECURITY SERVICES INCLUDE

Vulnerability identification in your system along with the knowledge of major areas of exploitation is critical. However what is more important is to convey all this information in a simple and concise way. This report includes all the information of the security controls assessed in the scope as well as an analysis of the areas that need to be checked for achieving the required amount of security.

The report is systematically designed into two parts: The high level management report suitable for the understanding of management personnel, and an in-depth technical document for the technical staff to understand the underlying security risks along with recommendations and preventive countermeasures.